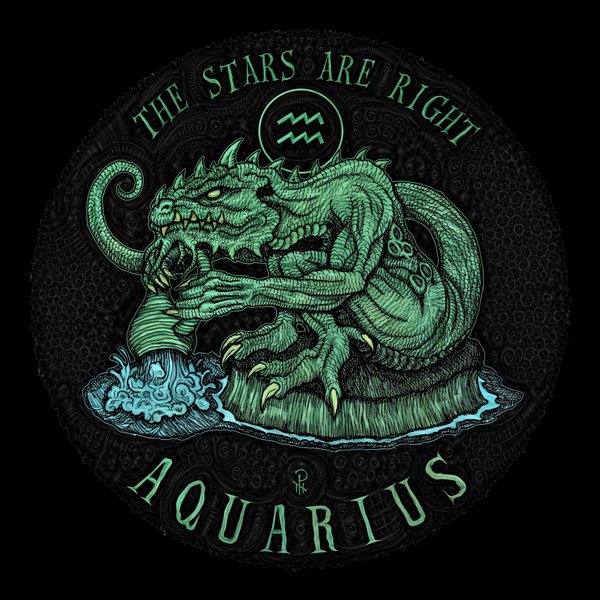 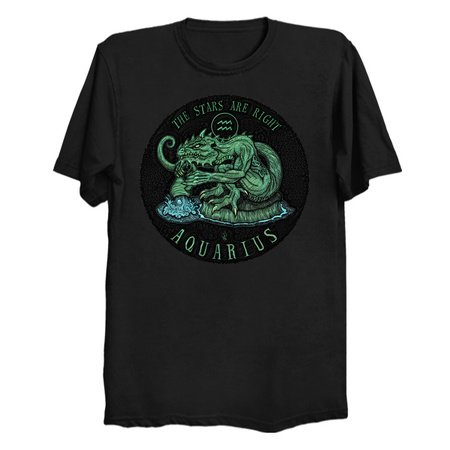 Bokrug Aquarius 2018 by Azhmodai
"The stars are right for those born under the sign of Aquarius! Astrology T-shirt inspired by Cthulhu mythos stories of HP Lovecraft. Perfect for Cthulhu fans, HP Lovecraft readers, horror and astrology fans alike.

""Thus of the very ancient city of Ib was nothing spared save the sea-green stone idol chiselled in the likeness of Bokrug, the water-lizard. This the young warriors took back with them to Sarnath as a symbol of conquest over the old gods and beings of Ib, and a sign of leadership in Mnar. But on the night after it was set up in the temple a terrible thing must have happened, for weird lights were seen over the lake, and in the morning the people found the idol gone, and the high-priest Taran-Ish lying dead, as from some fear unspeakable. And before he died, Taran-Ish had scrawled upon the altar of chrysolite with coarse shaky strokes the sign of DOOM."" -- H. P. Lovecraft, ""The Doom That Came to Sarnath"""
Tags: Lovecraft, Cthulhu, Astrology, Star Sign, Call of Cthulhu, Zodiac, Bokrug, Aquarius
SUGGESTED ITEMS
$19.95
Free Shipping Info & Our Quality