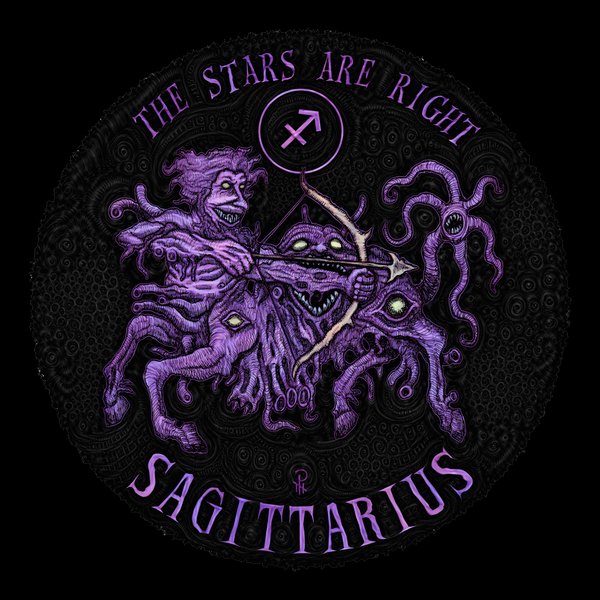 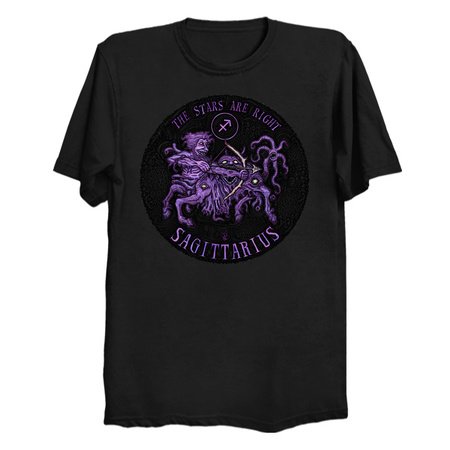 Dunwich Horror Sagittarius 2018 by Azhmodai
"The stars are right for those born under the sign of Sagittarius! Astrology T-shirt inspired by Cthulhu mythos stories of HP Lovecraft. Perfect for Cthulhu fans, HP Lovecraft readers, horror and astrology fans alike.

""Above the waist it was semi-anthropomorphic; though its chest...had the leathery, reticulated hide of a crocodile or alligator. The back was piebald with yellow and black, and dimly suggested the squamous covering of certain snakes. Below the waist, though, it was the worst; for here all human resemblance left off and sheer phantasy began. The skin was thickly covered with coarse black fur, and from the abdomen a score of long greenish-grey tentacles with red sucking mouths protruded limply. Their arrangement was odd, and seemed to follow the symmetries of some cosmic geometry unknown to earth or the solar system. On each of the hips, deep set in a kind of pinkish, ciliated orbit, was what seemed to be a rudimentary eye; whilst in lieu of a tail there depended a kind of trunk or feeler with purple annular markings, and with many evidences of being an undeveloped mouth or throat. The limbs, save for their black fur, roughly resembled the hind legs of prehistoric earth's giant saurians, and terminated in ridgy-veined pads that were neither hooves nor claws."" -- H. P. Lovecraft, ""The Dunwich Horror"""
Tags: Lovecraft, Cthulhu, Astrology, Star Sign, Call of Cthulhu, Zodiac, Dunwich Horror, Sagittarius
SUGGESTED ITEMS
$19.95
Free Shipping Info & Our Quality