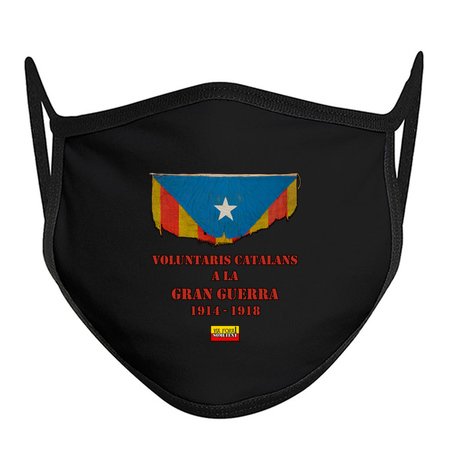 Great War's Catalan flag by McPitu
The star known as the Star of Verdum? or L'Estelada del Doctor Soler-Plà is a historic and centennial pro-independence flag that the Catalanist Union, a historical entity of which it was its leader and last president, Vicenç Albert Ballester, the creator of the popular flag. This sovereignist entity gave this flag, probably from the hand of Ballester himself, to the volunteer in the First World War, Camil Campanyà, to be taken to the front of Verdum (France) where he enlisted to go to fight, together with hundreds of comrades, to defend the freedom of the free nations of Europe. Unfortunately, Campanyà died in battle and after his burial in Paris, killed with that flag, a colleague of his returned it to another UC leader, Dr. Joan Soler-Pla to keep it as a sign of the cause of the Catalans who fought and died for Catalonia. During all the years following the Great War and until this year, the family of Dr. Soler carefully guarded it, even in times of prohibitions on Catalan symbols, a period in which the flag remained hidden in a double cupboard.
Sale Price: $24.95
Tags: wwi, great war, ww1, history, war, warfare, catalunya, catalonia
SUGGESTED ITEMS
$14.95
Free Shipping Info & Our Quality